Shares in General Electric (NYSE:GE) rose 34.2% in January, according to data provided by S&P Global Market Intelligence. The move was due to a combination of a change in investor sentiment and a set of better-than-expected fourth-quarter earnings released on the last day of the month.

Going into the end of 2018, GE was beset with worries over its declining free cash flow generation, potential funding requirements at GE Capital, and its deteriorating power segment. All of these factors came together to threaten the company’s liquidity position and challenged the feasibility of its debt-reduction plans. 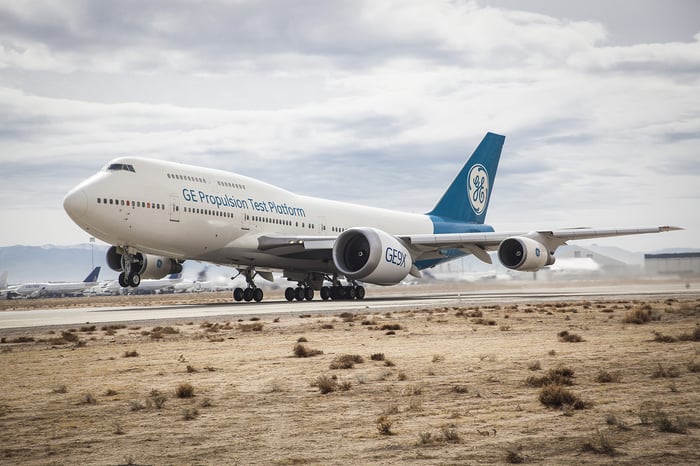 The stock was sold off heavily in response, but nearly every stock has a price worth paying, and even when looking at it with a reduced outlook for free cash flow, GE stock was starting to look cheap. On a risk/reward basis, GE’s stock looked worth buying.

Moreover, the new CEO, Larry Culp, has been taking pragmatic measures to shore up the balance sheet, such as keeping a larger share of the Wabtec merger and probably the GE Healthcare IPO, and he also cut the dividend.

Meanwhile, he’s been busy restructuring GE Power and taking his time to ensure that any guidance given by the company, on Power or on the company in general, is only given with what he describes as “conviction and confidence.”

It appears that the market is increasingly willing to look beyond the near term with GE and focus on the long-term earnings and cash flow potential of the company. Culp’s actions and a change in sentiment led to a rerating of the stock, and the fourth-quarter results went a long way toward reassuring investors.

Industrial free cash flow came in at $4.5 billion, and Culp said he anticipated “cash flow to grow substantially in 2020 and 2021.” That’s good news for investors and will focus minds on the fact that GE’s stock is best assessed over the long term.

The one disappointment — and it’s a significant point — is that Culp declined to give specific earnings or cash flow guidance for 2019 or beyond. Moreover, there was a lack of color over GE Power’s earnings and cash flow in 2019.

To be fair, he promised to do that soon, and every investor will surely want GE only to give guidance that it will meet. However, until he does so, it’s difficult to know just what GE will report in terms of earnings and cash flow in 2019 and beyond. This adds uncertainty.

The lack of color on the power segment and commentary on another year of decline in end demand suggests that restructuring in Power may take longer than many expect. Investors will be eagerly awaiting GE’s next update, in which we hope management will give more detail on what to expect going forward.