Nike (NKE ) is currently playing a leading role on the global stage at the 2018 FIFA World Cup in Russia. The sportswear company is also about a week away from reporting its quarterly financial results. So let’s evaluate Nike stock to show investors why they might want to buy NKE at the moment.

Nike has grown into the largest sports apparel company in the world by cultivating its brand through partnerships with key athletes, in key sports in the U.S. and around the world. Today, maybe more than ever before, Nike’s clothing and footwear is also worn far away from athletic competitions as the industry trends toward athleisure, which the likes of Lululemon (LULU ) and rival Adidas (ADDYY ) have capitalized on as well.

Meanwhile, Nike’s presence in soccer, the world’s most popular sport, is as big as ever. Nike sponsors 10 teams at this year’s World Cup, with German giant Adidas claiming 12. Meanwhile, one-time heir apparent Under Armour (UAA ) is nowhere to be found on soccer’s biggest stage—or in the sport in general. Nike is also the official jersey sponsor of America’s most popular sports, the NFL and the NBA, with reports it will soon take over MLB as well.

Nike also happens to sponsor seven of the eight most famous athletes on the planet, according to ESPN’s (DIS ) recently published World Fame 100 list. This list includes international soccer icons, Cristiano Ronaldo and Neymar—who both have a massive impact on Instagram (FB ) and Twitter (TWTR ) —as well as LeBron James and Kevin Durant.

The company’s global reach was demonstrated through its most recent quarterly results in which Nike reported big sales jumps outside of the U.S. Nike’s Greater China revenues climbed 24% to $1.34 billion, while sales in Europe, the Middle East, and Africa surged 19% to hit $2.29 billion.

Many of the recent narratives are that Adidas has caught up to Nike through a massive North American expansion, driven by key partnerships in both sports and entertainment. There is some truth to this, as Adidas has been able to grow in the U.S., but let’s take a look at Nike’s recent price movement to see what’s really going on.

Shares of Nike have climbed 143% over the last five years, which outpaces Adidas’ roughly 111% surge and crushes the S&P 500’s 79%. This picture does change dramatically when assessing the last three years. Nike stock has popped just over 38%, while ADDYY has skyrocketed 174%. 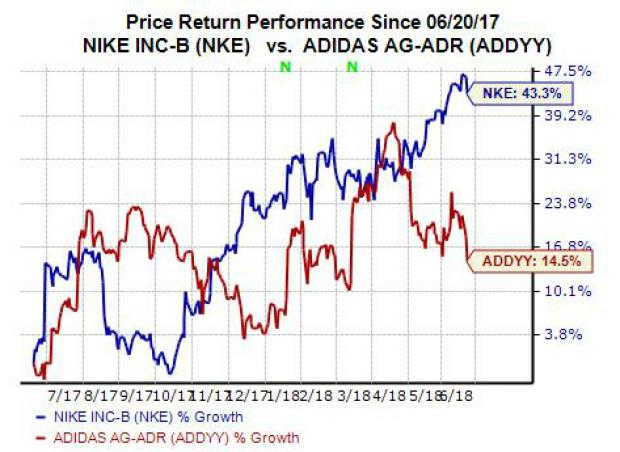 Yet, as investors will see, NKE has outperformed Adidas stock over the last year. Nike stock has also climbed higher since the start of the year and has jumped over 10% during the past three months, with Adidas stock down 8%. 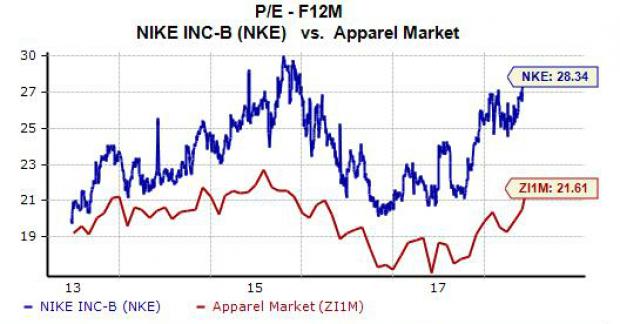 Over the last year, Nike has traded as high as 28.5X and as low as 20.7X, with a one-year median of 25.5X. Clearly, Nike is resting just below its year-long high. But it is also worth noting that Nike has traded at a premium compared to its industry over the last five years, which means investors have been willing to pay more for a company they believe offers more value.

Nike is set to report its fiscal fourth-quarter financial results after market close on Thursday, June 28, which means investors will want to understand what to expect from the sportswear company.

Our current Zacks Consensus Estimates are calling for Nike’s fiscal Q4 revenues to climb by 8.24% to $9.39 billion. Meanwhile, Nike’s quarterly earnings are projected to pop by 6.67% to $0.64 per share.

Investors should also note that the company’s earnings picture is being adversely impacted by its shift toward more direct-to-consumer and e-commerce focused sales in a retail environment obsessed with Amazon (AMZN ) . These strategic initiatives should end up paying off in the not so distant future, and should also lead to higher margins.

Nike is also currently a Zacks Rank #2 (Buy) and sports an “A” grade for Growth in our Style Scores system. And let’s not forget that the company is a dividend payer, with a yield of 1.06%.

Looking for Stocks with Skyrocketing Upside?

Zacks has just released a Special Report on the booming investment opportunities of legal marijuana.

Ignited by new referendums and legislation, this industry is expected to blast from an already robust $6.7 billion to $20.2 billion in 2021. Early investors stand to make a killing, but you have to be ready to act and know just where to look.