Taiwan Semiconductor Manufacturing Company (NYSE:TSM) is one of my favorite publicly traded chip companies. The company is a contract chip manufacturer, which means it develops the tools and technologies to allow other chip companies to design chips that TSMC ultimately manufactures for those companies.

This business model is nice for a couple of reasons. Firstly, TSMC doesn’t have to do the extensive legwork to figure out what chips people want to buy, and then put in the herculean effort to design and market those chips — TSMC’s customers take care of that. 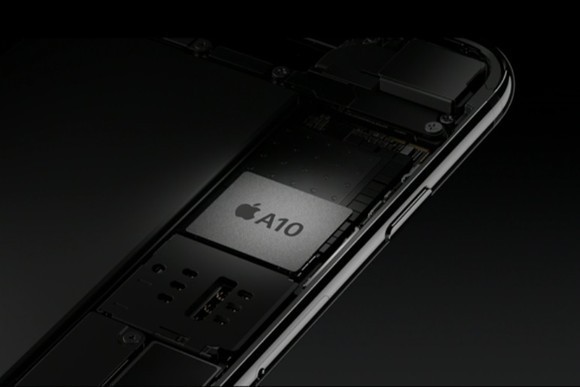 The Apple A10 chip is manufactured exclusively by TSMC. Image source: Apple.

Moreover, since TSMC will build chips for anybody willing to write a big enough check, it doesn’t depend on a single company’s efforts to succeed in a market — it usually builds chips for most, if not all, of the major players going after a particular market. This means as long as the underlying market is good, TSMC is set to benefit.

It’s a great business model that has allowed TSMC to profit from virtually every megatrend in the chip industry and positions the company well to capitalize on future trends.

However, TSMC isn’t attractive just because of its business model — after all, many of TSMC’s competitors, whose business models are similar to TSMC’s, simply aren’t successful. There are things TSMC does better than the competition that allows its smart business model to shine through, making its stock an attractive buy.

Here are three reasons I think TSMC is a great stock for investors looking to invest in a chip company.

Much of TSMC’s revenue comes from the smartphone market, which is admittedly maturing, but the company has indicated that it expects to see the amount of dollar content inside of each new smartphone sold to grow over time. This means even if overall smartphone unit shipments don’t grow much, TSMC can still enjoy smartphone-related growth as its customers cram more advanced technologies (e.g.,artificial intelligence co-processors, beefier graphics, and so on) into their devices.

Additionally, TSMC is trying to build technologies and acquire customers looking to participate in new growth areas like data center accelerators, artificial intelligence chips, and automotive chips. The dollar content growth opportunity in smartphones, coupled with TSMC’s aggressive push into other markets, makes me confident that the company can achieve its stated long-term revenue growth target of 5% to 10% annually.

That isn’t the most exciting kind of growth you’ll see from a chip company, but considering TSMC is a mature megacap chip stock that’s a leader in its field, this kind of growth is solid. 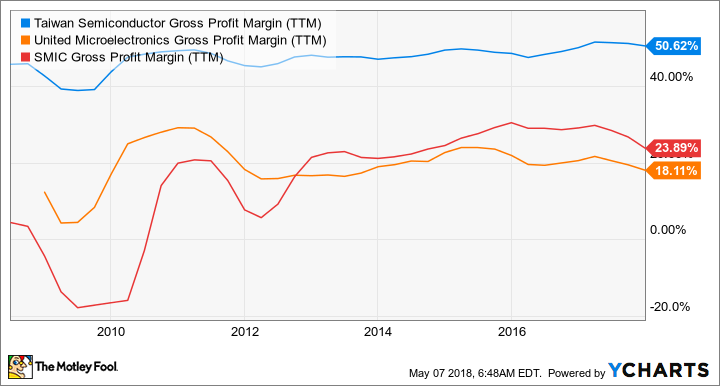 For a company like TSMC, gross profit margin is largely a function of two things. The first is the amount of money it can generate from the sale of a processed silicon wafer (chips are manufactured by patterning chips onto a silicon wafer using expensive equipment) and the second is how much it costs the company to build that silicon wafer.

However, it’s not just about having the most advanced technology, but about having a good cost structure across the board. Although many of TSMC’s less-advanced peers can build chips that are of similar quality/performance as what TSMC can build using its older-generation technologies, TSMC can command much higher margins because it can manufacture chips using those mature technologies at higher yield rates than the competition can.

To understand why this is important, understand that companies that use contract chip manufacturers usually buy chips by the wafer. The more good chips they can get per wafer (meaning, the higher the yield rate of the manufacturing processes used to build the chips), the more valuable that wafer is.

Since TSMC’s yield rates on older technologies are generally significantly higher than those of its smaller peers, TSMC can charge more per wafer while still delivering an equal-to-better per-chip cost to its customers. This means TSMC enjoys higher margins than its competition while also keeping its customers happy.

TSMC’s execution track record over the last eight years has been strong and getting better with each passing year, so I’m confident the company can continue to command industry-leading gross profit margins and, ultimately, profitability.

3. An opportunity in the dip

TSMC shares dropped after its most recent earnings conference call as its forward guidance, thanks to a slowdown in smartphone chip sales, came in lower than expected. The company also cut its full-year 2018 growth forecast from between 10% and 15% to roughly 10%.

When a company reduces its financial guidance, the stock price usually follows. As of writing, TSMC shares trade for $38.59, down more than 17% from its 52-week high.

If you’re a long-term investor, though, such dips can be viewed as buying opportunities. Not every dip proves to be a buying opportunity, but considering that TSMC operates in an industry that seems poised to thrive, and given its best-in-class execution, I think the share price will be much higher five years from now than it is today.

If you’re looking to add a chip stock to your portfolio, then TSMC seems like a good one if you want an established market leader that has solid long-term growth prospects.