Twitter (TWTR ) shares jumped over 2% Monday, along with Apple (AAPL ) , Microsoft (MSFT ) , and other tech standouts. Despite its recent climb, shares of Twitter rest well below their 52-week high. So let’s see why Twitter looks like a buy heading into the company’s fourth-quarter earnings release Thursday.

Twitter, like Facebook (FB ) , has dealt with backlash over the company’s role in the spread of misinformation and “fake news.” CEO Jack Dorsey and the company have cleaned up Twitter and tried to rid the social media platform of fake user accounts and “prioritize the health of the platform.” This did hurt the company’s user metrics last quarter, with its monthly active user totals down 4 million year-over-year and 9 million quarter-over-quarter.

Despite some of the setbacks, Twitter posted its fourth straight quarter of GAAP profitability in Q3. Meanwhile, Twitter’s total ad engagements surged 50% and cost per engagement sunk 14%. These two metrics could signal that TWTR is headed in the right direction since advertising accounted for 86% of revenue in Q3.

Going forward, Twitter is likely to remain attractive to advertisers because the social media platform has become a place where millions of people consume information, from breaking news to entrainment. Plus, as non-ad supported platforms like Amazon Prime (AMZN ) and Netflix (NFLX ) grow, marketers will need to reach consumers somewhere. Twitter has also actively expanded its own live streaming video offerings through deals with dozens of media outlets such as ESPN (DIS ) .

With all that said, owning Twitter stock has been no easy ride since the firm went public in 2013. Shares of Twitter have, however, bounced back over the last few years and are up 36% in the past 12 months. Twitter stock rested at roughly $34 a share Monday, which marks a 29% downturn from its 52-week high and might set up a solid buying opportunity for those high on the social media firm. 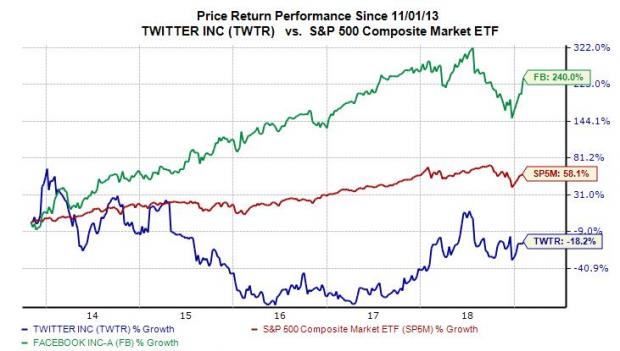 Moving on, let’s take a look at what investors should expect from some of Twitter’s vital company metrics, with the help of our NFM estimates. The company’s total quarterly advertising revenue is expected to pop just over 18% to reach $760.34 million. TWTR’s growing data licensing business is projected to surge roughly 24% and hit $107.87 million.

Twitter’s worldwide MAU total is expected to come in at 319.05 million in Q4, which would mark a decline of 11 million users or 3.3% from the fourth-quarter of 2017. Investors should also note that our NFM estimate would represent a 7 million sequential decline as the company’s fake user cleanup rolls on.

Twitter is a Zacks Rank #1 (Strong Buy) at the moment based on its recent earnings estimate revision trends that also sports a “B” grade for Growth in our Style Scores system. The company is scheduled to release its fourth quarter and fiscal year 2018 financial results before the opening bell on Thursday, February 7.

So, make sure to come back to Zacks for a complete breakdown of the firm’s actual Q4 results.