Dick’s Sporting Goods (NYSE:DKS) has made a number of decisions since February’s school shooting in Parkland, Florida that some investors may question as to whether or not they’re in the company’s best interests.

Halting sales of certain semi-automatic firearms (modern sporting rifles, or MSRs) at its 35 Field & Stream stores(it previously stopped selling MSRs at its Dick’s stores after the Sandy Hook shootings in Connecticut). Raising the minimum age to buy a firearm from 18 to 21. Stopping the sale of high-capacity magazines. Saying it would destroy rather than sell the remaining MSRs in its inventory. Hiring new Washington lobbyists to actively push for gun control.

CEO Ed Stack recently said he was a gun owner himself and supported the Second Amendment while acknowledging “the vast majority of gun owners in this country are responsible, law-abiding citizens.”Nonetheless, the company’s actions angered many gun owners who have vowed to boycott the chain.

The National Shooting Sports Foundation also voted unanimously to expel Dick’s from membership in the industry trade group for “conduct detrimental” to the organization. 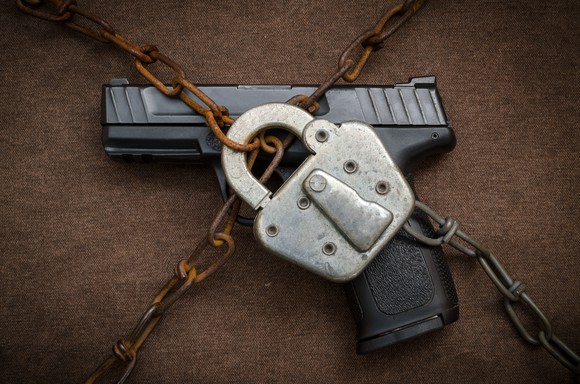 Dick’s Sporting Goods recent decisions on gun sales may not harm the company as much as some think. Image source: Getty Images.

Why are results hurting?

While gun owners and the industry are obviously upset by Dick’s decisions, the moves were praised by others and emulated by retailers, including Walmart and Kroger, which also raised the purchasing age for firearms (Walmart had stopped selling MSRs three years ago).

The issue Dick’s Sporting Goods investors need to decide is how much sway gun owners have over the rest of its business — firearms sales, and MSR sales in particular, account for only a small part of the chain’s total revenue.

Dick’s operates 716 stores under its name, in addition to the few dozen Field & Stream locations and almost 100 Golf Galaxy specialty stores. MSRs had been relegated to the Field & Stream chain, and analysts estimate that since the broad-based hunting category itself represented only 10% of total sales, the controversial MSRs account for just a tiny percentage of that figure. Shedding them won’t meaningfully impact the company’s business.

Dick’s comparable-store sales fell 2% in the fourth quarter and were down 0.3% for the full year. While it was partly due to weak demand for firearms and other hunting merchandise, it was more because of problems with its relationship withUnder Armour. It is Dick’s second best-selling brand behind Nike, accounting for around 12% of total sales.

Since Dick’s announcement on MSRs didn’t occur until after the quarter had ended, it had no impact on the reported numbers. The poor results weren’t because hunters or gun enthusiasts were refusing to buy apparel or sneakers to protest management’s actions — it was the deteriorating situation with one of its vendors that really sunk the chain.

Dominos may not fall

But now that Dick’s Sporting Goods’ new positions on guns and gun control are in effect, will they have an impact on future results? It will depend on whether gun owners were really the customers driving sales in other departments. Even then, experts have found most boycotts have little impact on a company’s bottom line. An issue may cause one segment of the population to stop shopping at your stores, but it could energize another to come in — and ultimately consumers are unlikely to change their buying patterns.

It’s likely Dick’s firearms business will be hurt. Gun manufacturers like Mossberg, Springfield Armory, andMKS Supply have said they will no longer do business with the retailer, and since gun owners are passionate about the issue, it’s not a business that will be offset by a different segment of the population.

Stack accepts that some people will no longer shop his stores for anything.But he also believes the gun industry is declining and represents a small component of his sales. The impact on total operations will be probably be minimal.

In fact, a survey by the market research company YouGov found that public perception of Dick’s Sporting Goods improved more than 40% followingits announcement on gun sales.Based on aggregated visits at more than 700 Dick’s stores across the country, Reveal Mobile found that overall foot traffic actually rose 3.7% in the days following its announcement.

A gun owner who is also a Dick’s Sporting Goods investor is going to believe the company’s moves weren’t in their best interests. But overall, management probably hasn’t hobbled itself, and the results of its gun control initiatives remain to be seen.