Encore Capital Group (NASDAQ:ECPG) was downgraded by Zacks Investment Research from a “hold” rating to a “sell” rating in a note issued to investors on Tuesday.

According to Zacks, “Encore Capital Group is a leading provider of debt management and recovery solutions for consumers and property owners across a broad range of assets. Through its subsidiaries, the company purchases portfolios of consumer receivables from major banks, credit unions, and utility providers, and partners with individuals as they repay their obligations and work toward financial recovery. Through its Propel Financial Services subsidiary, the company assists property owners who are delinquent on their property taxes by structuring affordable monthly payment plans. Encore’s success and future growth are driven by its sophisticated and widespread use of analytics, its broad investments in data and behavioral science, the significant cost advantages provided by its highly-efficient operating model and proven investment strategy, and the company’s demonstrated commitment to conducting business ethically and in ways that support its consumers’ financial recovery. “

A number of other research analysts also recently issued reports on ECPG. BidaskClub upgraded Encore Capital Group from a “strong sell” rating to a “sell” rating in a research note on Monday, February 5th. ValuEngine upgraded Encore Capital Group from a “buy” rating to a “strong-buy” rating in a research note on Friday, February 2nd. Finally, Oppenheimer set a $51.00 price objective on Encore Capital Group and gave the company a “buy” rating in a research note on Thursday, February 22nd. Two equities research analysts have rated the stock with a sell rating, two have given a hold rating, three have given a buy rating and one has issued a strong buy rating to the company. The stock currently has a consensus rating of “Hold” and an average target price of $50.90.

Encore Capital Group (NASDAQ:ECPG) last announced its quarterly earnings data on Tuesday, May 8th. The asset manager reported $0.98 earnings per share (EPS) for the quarter, missing analysts’ consensus estimates of $1.04 by ($0.06). The business had revenue of $326.79 million during the quarter, compared to the consensus estimate of $326.38 million. Encore Capital Group had a net margin of 7.01% and a return on equity of 18.70%. The firm’s revenue for the quarter was up 20.2% compared to the same quarter last year. During the same quarter last year, the company earned $0.95 EPS. analysts predict that Encore Capital Group will post 4.68 EPS for the current year.

In other Encore Capital Group news, insider Paul Grinberg sold 18,773 shares of the company’s stock in a transaction on Monday, February 26th. The stock was sold at an average price of $41.88, for a total value of $786,213.24. Following the completion of the transaction, the insider now owns 200,518 shares in the company, valued at approximately $8,397,693.84. The sale was disclosed in a filing with the Securities & Exchange Commission, which can be accessed through the SEC website. 8.80% of the stock is owned by corporate insiders.

Encore Capital Group, Inc, a specialty finance company, together with its subsidiaries, provides debt recovery solutions and other related services for consumers across a range of financial assets worldwide. The company purchases portfolios of defaulted consumer receivables at deep discounts to face value, as well as manages them by working with individuals as they repay their obligations and works toward financial recovery. 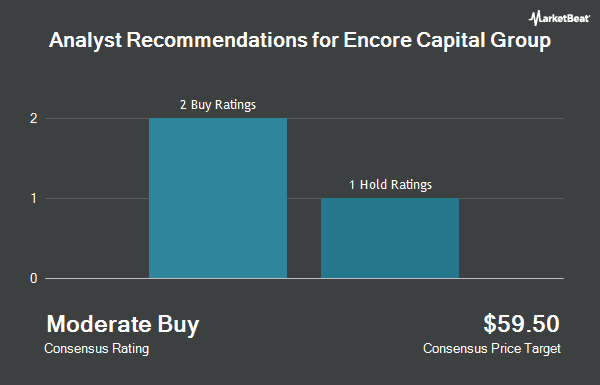